Selenium is an essential trace element that is present in its inorganic forms (selenate and selenite) in soil and in its organic forms (selenomethionine and selenocysteine) in plants.1 Selenomethionine is also present in animal tissues. Selenium is a component of over 24 different selenoproteins, which are important for reproduction, thyroid hormone metabolism, and DNA synthesis, as well as protection from infection and oxidative damage.

There has been great interest in selenium as a potential chemopreventative agent against various types of cancers, particularly of the prostate. Though many studies demonstrated an inverse association between serum selenium levels and prostate cancer incidence,2,3 there have been conflicting results from randomized controlled trials with selenium supplementation.

Similar findings were demonstrated by several large, randomized, controlled trials (1 of which was included in the meta-analysis).

The multicenter, double-blind Selenium and Vitamin E Cancer Prevention Trial (SELECT) randomly assigned 35,533 men aged 50 (if African American) or 55 (all other ethnicities) and older to receive selenium (200 µg/day of L-selenomethionine), vitamin E (400 IU/day of all rac-α-tocopheryl acetate), selenium plus vitamin E, or placebo for 7 years.5 Supplementation was discontinued at the interim 7-year analysis due to futility. Neither selenium nor vitamin E provided a significant benefit during a median follow-up of 5.46 years (hazard ratio [HR] for prostate cancer with selenium, 1.04; 95% CI, 0.83-1.30).

A Southwest Oncology Group (SWOG) S9917 trial of 423 men with high-grade prostatitic intraepithelial neoplasia were randomly assigned to receive selenium (200 µg/day of selenomethionine) or placebo for 3 years.6 There was no significant difference in progression to prostate cancer or Gleason scores of those who developed cancer between study groups.

The Nutritional Prevention of Cancer Trial, however, demonstrated a protective effect of selenium supplementation against the development of prostate cancer.

The double-blind Nutritional Prevention of Cancer Trial randomly assigned 1312 subjects with confirmed history of nonmelanoma skin cancer from low-selenium areas in the Eastern United States to receive selenium (200 µg/day from 0.5-g high-selenium yeast) or placebo with a mean follow-up of over 7 years.8 The primary endpoint was incidence of nonmelanoma skin cancer, but the incidence of prostate and other cancers were secondary endpoints. Selenium supplementation resulted in significantly lower incidence of prostate cancer compared with placebo (adjusted RR, 0.48; 95% CI, 0.28-0.80; P = .005), with no differences in clinical stage or metastatic disease between groups. 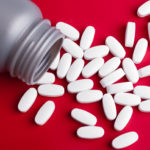