What is a prognosis?

A prognosis is an estimate of the likely course and outcome of a disease. The prognosis of a patient diagnosed with cancer is often viewed as the chance that the disease will be treated successfully and that the patient will recover.

What factors affect a patient’s prognosis?

Many factors can influence the prognosis of a person with cancer. Among the most important are the type and location of the cancer, the stage of the disease (the extent to which the cancer has spread in the body), and the cancer’s grade (how abnormal the cancer cells look under a microscope—an indicator of how quickly the cancer is likely to grow and spread).

Other factors that affect prognosis include the biological and genetic properties of the cancer cells (these properties, which are sometimes called biomarkers, can be determined by specific lab and imaging tests), the patient’s age and overall general health, and the extent to which the patient’s cancer responds to treatment.

How do statistics contribute to predicting a patient’s prognosis?

In estimating a cancer patient’s prognosis, doctors consider the characteristics of the patient’s disease, the available treatment options, and any health problems the patient may have that could affect the course of the disease or its ability to be treated successfully.

The doctor bases the prognosis, in large part, on information researchers have collected over many years about hundreds or even thousands of people with the same type of cancer. When possible, doctors use statistics based on groups of people whose situations are most similar to that of the patient.

Several types of statistics may be used to estimate a cancer patient’s prognosis. The most commonly used statistics are listed below.

Because survival statistics are based on large groups of people, they cannot be used to predict exactly what will happen to an individual patient. No two patients are entirely alike, and their treatment and responses to treatment can vary greatly. Also, because it takes years to see the impact of new treatments and diagnostic tests, the statistics a doctor uses to make a prognosis may not reflect the effectiveness of current treatments.

Nevertheless, the doctor may speak of a favorable prognosis if the information from large groups of people suggests that the cancer is likely to respond well to treatment. A prognosis may be unfavorable if the cancer is likely to be difficult to control. It is important to keep in mind, however, that a prognosis is only an estimate. Again, doctors cannot be absolutely certain about the outcome for an individual patient. 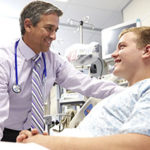