A 63-year-old male is referred by his primary care physician for work-up of possible lung cancer. The patient has a history of shortness of breath and persistent cough (with no accompanying hemoptysis) and a chest x-ray is suspicious for malignancy. The patient has not experienced any weight loss.

The patient’s physical examination findings were normal, as were his laboratory studies, including complete blood cell count, liver, and kidney function tests. There is no sign of infection.

A CT scan of the chest, abdomen, and pelvis revealed a 3 cm mass located in the right upper lobe, with hilar and mediastinal lymphadenopathy, and a lytic lesion in the T5 vertebral body. Because the CT scan suggests he has advanced lung cancer, a PET/CT study was done to assess for distant metastases. This scan revealed fluorodeoxyglucose avidity in the right upper lobe mass, mediastinal lymph node, and T5 vertebral body, but no other signs of distant metastases.

A subsequent needle aspiration of the right upper lobe mass showed poorly differentiated adenocarcinoma based on cytology and immunohistochemistry results including cytokeratin 7 positive, cytokeratin 20 negative, thyroid transcription factor-1 positive, and ALK negative. There was not enough tissue to determine either the EGFR or KRAS status. Positive lymph nodes were found during mediastinal staging, confirming the imaging results. An MRI scan of the brain was negative.

Based on these studies, the patient was diagnosed with advanced non-small cell lung cancer (NSCLC), probably stage IV with adenocarcinoma histology (ie, nonsquamous).

Because he has advanced lung cancer, surgery is not appropriate for this patient. The combination of pemetrexed/carboplatin/bevacizumab is the best choice of therapy for this patient with stage IV nonsquamous NSCLC (adenocarcinoma histology) with osseous metastasis. In this situation, especially...

Because he has advanced lung cancer, surgery is not appropriate for this patient. The combination of pemetrexed/carboplatin/bevacizumab is the best choice of therapy for this patient with stage IV nonsquamous NSCLC (adenocarcinoma histology) with osseous metastasis. In this situation, especially when EGFR status of the patient is unknown, the National Comprehensive Cancer Network (NCCN) Clinical Practice Guidelines in Oncology™ recommend the use of bevacizumab plus chemotherapy if certain criteria are met. He is eligible for bevacizumab based on his nonsquamous NSCLC histology and absence of hemoptysis.

The combination of gemcitabine/carboplatin is suboptimal because regimens consisting of a platinum-based agent combined with gemcitabine have been demonstrated to be less effective compared with pemetrexed/platinum-based regimens in patients with nonsquamous cell histology.

The patient completed 6 cycles and is currently on maintenance pemetrexed. 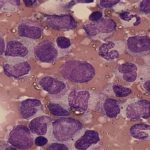